Down The Line Shooting, or “Trap Shooting” takes on 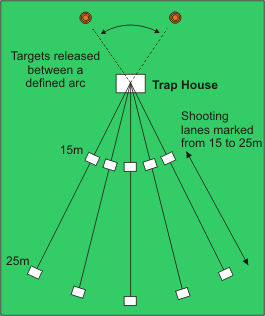 several forms, but no matter the variation, they are all shot over a standard measured layout.

This layout is made up of five (5) lanes or tracks that are displayed from fifteen (15) metres (from the target machine) to twenty-five (25) metres, with the lanes tapering towards the traphouse. The most used pad on this layout is fifteen (15) metres, which assumes the title of common mark. However, a handicap system is shot with the individual shooter’s ability and skill deciding the handicap meterage.

In Down The Line Shooting, the targets are thrown from an above ground traphouse which is in front of the tracks. This is done by an oscillating machine which is released electrically by a voice command system on the shooter’s command of “pull”. The targets are thrown within an arc of 22 degrees right and 22 degrees left of a centre line taken through the centre of number three (3) track.
The distance is set to attain a predetermined height and distance. Therefore the shooter knows the height and distance that the target can attain, but not the angle the individual target will be released on when the command “pull” is given from a single oscillating machine. It is the unknown factor that makes the discipline of Down The Line Shooting challenging and exciting.