Ball Trap is similar to Down The Line (Tra 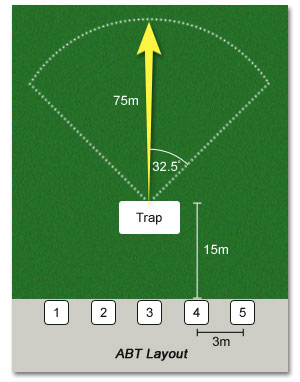 p), where the shooters stand 15 meters in an Arc from the throwing arm, however, the roof of the trap house is at ground level. The target is thrown to 76 meters +or- 1 meter in distance and at heights varying between 1 meter and 3.5 metres at 10 meters from the trap house. The targets are also thrown in a 90 degree arc.

Ball Trap is very popular in Europe because of its similarity to ISSF Trap. It compares to ISSF Trap which utilizes 15 machines that are set to predetermined angles prior to the commencement of each days competition. It is easily understood why Ball Trap is referred to as the poor man’s ISSF Trap as targets are thrown at the same distance and angles but with only one machine not 15 and with random targets not predetermined. The ACTA allow this discipline to be shot with a half second delay using 28gr. loads, however, the ISSF ruling body specify instant release using 24 gr. loads.